A very old drawing i just found from when i started working with Polaroid Transfers. The original image is from a book on mannequins. This is from around the time I started the first body projects and was wondering if all the pieces would be inside or outside the body. The airbrushing is quite crude, with very little reflected colour in the shadows. This one is made from 669 Polaroid – for the body projects I used type 59. It is a pity the material is not still made or that the Impossible Project have not revived the peel apart films.

These two studies are from 1993 and follow on from the long yellow drawing at the end of the post before last. The vertical yellow lines in that drawing were a note that the construction did not include an idea of context, and these were attempts to imagine how signals in the ether would register on the walls of the architecture (which were sensitive to electronic signals in our skin). As before, these are stereoscopic pairs and make more sense seen in 3D.

These are from around 1992, and go with some of the drawings I posted a couple of weeks ago of spaces that were driven by the occupant’s desires and anxieties. I am away at the moment but will try and find time fro a proper post tomorrow.

After the work int he previous post there are a number of studies that look closer at some of the conditions within the yellow drawing. Above is a study for a much larger drawing (below) of the space between the lower legs of the two people walking. In each case a single (and sectioned) figurative foot locates the scale and nature of the abstract registration of knee, lower leg and foot.

Some other drawings (this time drawn over Polaroid transfers) build up a perceptual composite of the foot during this walk (below). Both are drawn oer images of X-Rays. 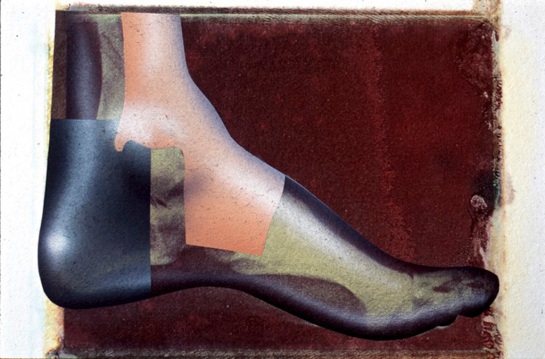 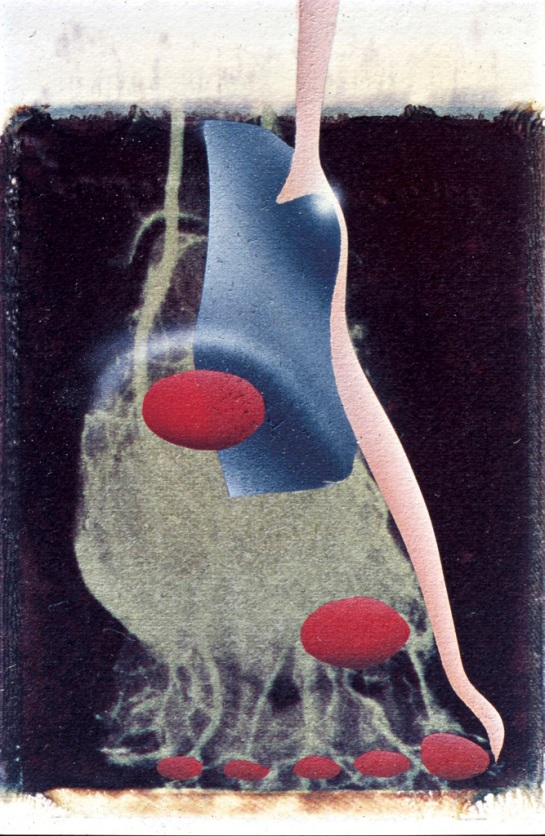 As I mentioned in the last post, the vertical yellow lines in the yellow drawing sit in place of a coherent idea of context for the space. THis drawing is a suggestion that the skin of the space, which is sensitive to electronic signals in the skin of the people who walk through it, is also sensitive to electronic signals in the ether. The impressions in the architectural skin in this image (above) are from navigation signals and are quite stable. As with previous pairs of drawings, these are stereoscopic so if you go cross eyed so that one image registers over the other, you will see the thing in 3D. The animation figure was built for a stereoscopic film of this project. I think it is stored on obsolete media, but if i can find it I might post it. 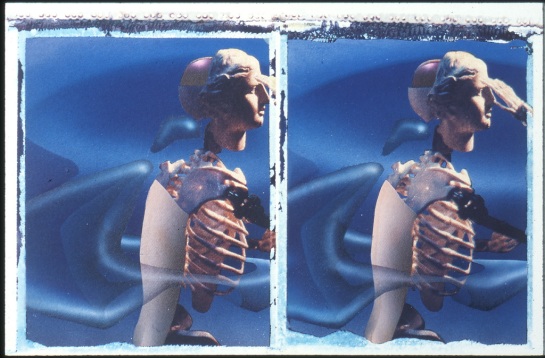 The image above (also stereoscopic) is a personal space study. It is quite a hard one to resolve as there is  incomplete overlap in the images, but if you can resolve it the personal space drawn around her body works quite well.

The last image in this post is a later attempt at similar content to the yellow drawing (in the previous post) but with a mixture of instantaneous and durational images (working from a photofinish-like photograph of two people walking). All these drawings are from 1994.

After drawing the spaces in the previous post (Hall and Staircase) the thing that fascinated me most was how one would perceive such a space, where you are implicated in the nature of that place. How would you construct a spatial consciousness in a space that was constantly adapting to you and others? The drawing above, and below in detail, shows two people walking, as a Marey-like abstraction of the body. Around them are a series of grey pieces that are a mixture of perceptions (with the rounded edges, rather as the resolution of an optical cone, and recollections with the squarer edges (that are behind them). It is an incomplete composite of a duration, where some parts of the space are emerging and others decaying while the sense of the whole is neither what is was, nor what it will be and certainly not what it is. The snotty stuff int he middle is what they imagine to be their personal space while the vertical yellow lines discuss an as yet unresolved sense of context. These are from 1993.

The figures in the blue frame are an elevation of the two people showing them as an imagined presence, trying to imagine how they would imagine their part in the evolving condition. The drawings relate to a couple of studies that I will post some other time, but there is a specific drawing that speculates on this issue relative to the drawing above. It is shown below. 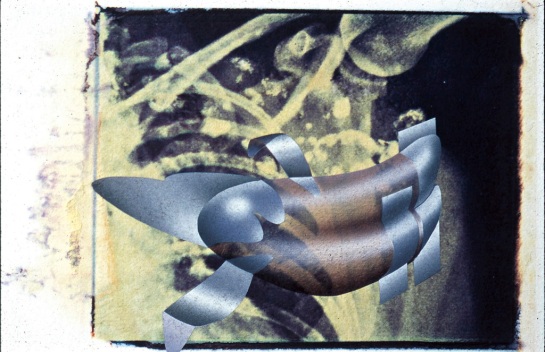 These drawings were made in 1992 when i was looking at the implications that a range of emerging new technologies might have on architecture. One in particular, intelligent gel, offered the possibility of an active flexible surface. In the four sections below someone walks in a hallway that is sensitive to her desires and anxieties. These are translated spatially (and detected for the natural electronic signals in her skin). There are also practical movements – the ground moves up to accept each step to maintain a certain horizon, for instance. In the second section a staircase appears (the same situation as in the perspective above), in the third the person emerging from the staircase enters the first person’s space. In the fourth drawing the two people go their own ways while the space tries to reconcile their composited desires and anxieties. THe project was far more of a question than a proposal but it was the questions that came out of these drawings that nourished the work much more. 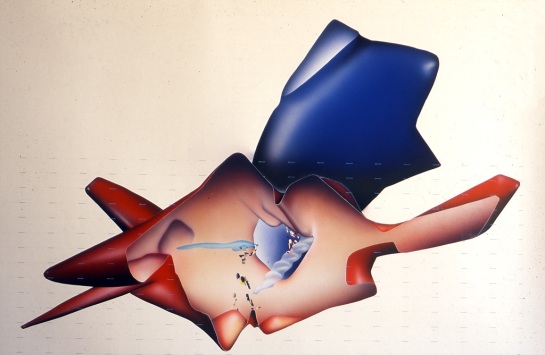 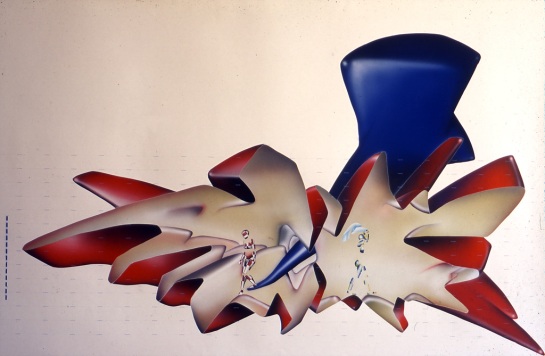 All these drawings are airbrushed ink and paint on paper