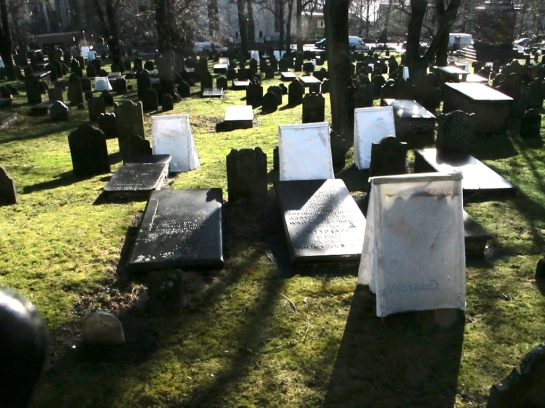 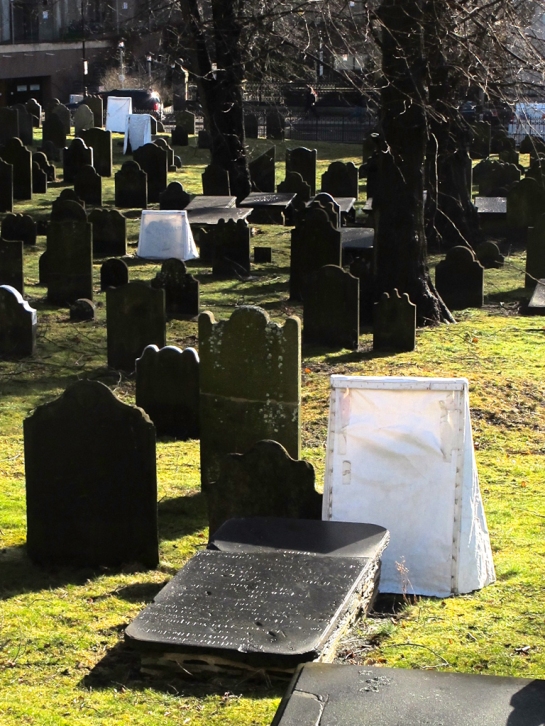 I am in Halifax, Nova Scotia, and the Old Burying Ground in the middle of town has a bunch of shrouds over the grave stones. I was here last year and was told that the similar devices then were to commemorate the graves of those who died on the Titanic, but the plaque on the gates suggests that burials stopped before the Titanic sank. I will try to find out more, and post some 3D pictures tomorrow or the next day.

I Posted some photographs of the Mourners a few days ago from an exhibition in Los Angeles. These are plaster casts of the Mourners from the museum of The City of Architecture and Heritage in Paris and seeing these copies was my introduction to the Mourners. Apart from the strange presence of the  small figures, they are extraordinary feats of casting, as the folds and hoods present numerous undercuts. Around these figures are full-sized casts of gothic church entrances. 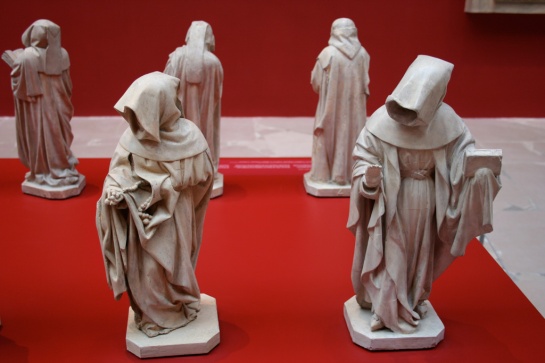 I have been sharing my attic studio with these characters recently. The house has been on the market  in anticipation of a return to the UK in January and they have been moved to my studio so as not to scare off potential buyers. It seems the people who bought the house liked them anyway. They normally hang out in the living room (with a few others), as seen below (also with the author).

Medical models appear so much more critical than their architectural equivalent. The section lines are content driven and understand the general symmetry of the body, so they tease your imagination to carry what exists at one layer on one side over to that other, where greater depths are then revealed. I purchased my first one (that I keep at work) when I moved to Copenhagen. In London I would borrow one from the anatomical lab at UCH, who were very helpful as I was teaching at the Bartlett, also part of UCL. In Copenhagen the Academy had no affiliations with medical schools, so I would borrow the Academy’s van and drive all my equipment to the alcohol dependency unit of a nearby hospital who were happy for me to work with it there but not to borrow it. As there were so many knowing looks by people seeing the school of architecture van outside the alcohol dependency clinic, and also the inconvenience of having to move all my lights and large format camera, I bought my own figure. I have not done any body drawings for a while, pertly due to the demise of Polaroid film which I used to use to make transfers, but with some distance it would be good to rethink the project some time, with one of the other figures.

Part of the yardstick collection. It started with a need for one (for a project) and, as these things do, it got a little out of hand. Almost all of them are from Winnipeg, mostly advertising for lumber yards, piston ring suppliers (these normally have numbered holes in them, I believe to put the engine valves in), fabric suppliers and some quite specialised bed spring measures. The oil company ones tend to be square in section.