Racks of control panels for the Gemini program in one of the launch block houses at Cape Canaveral. 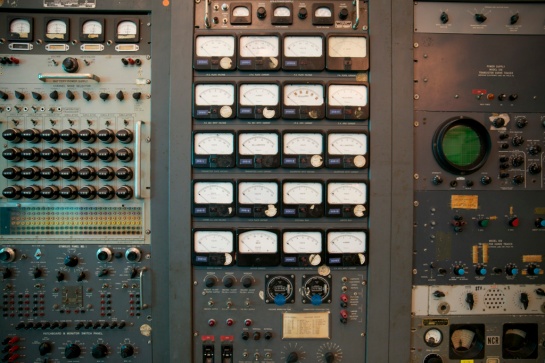 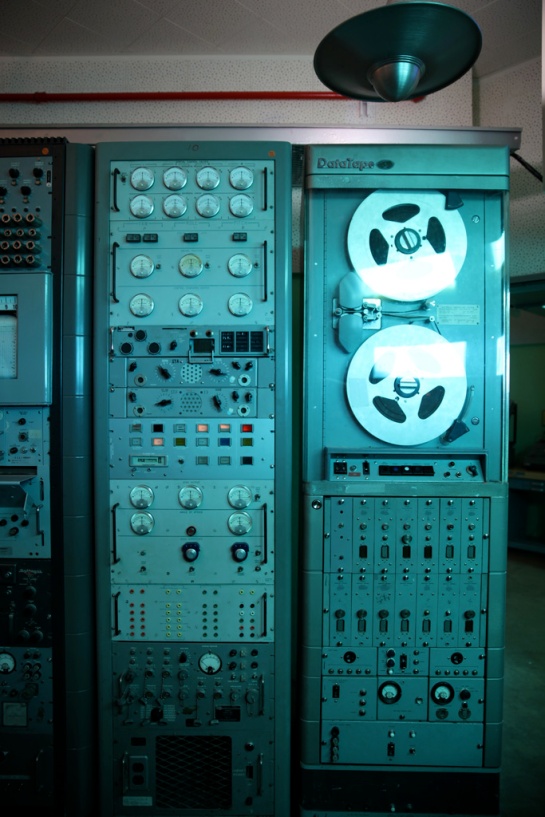 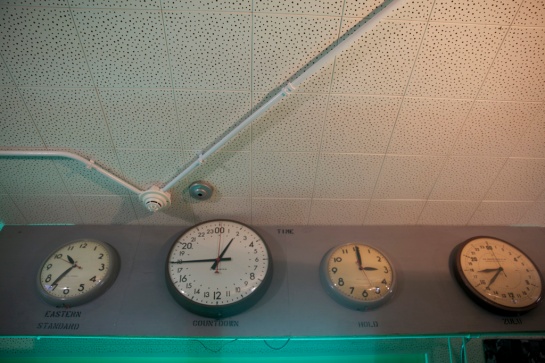 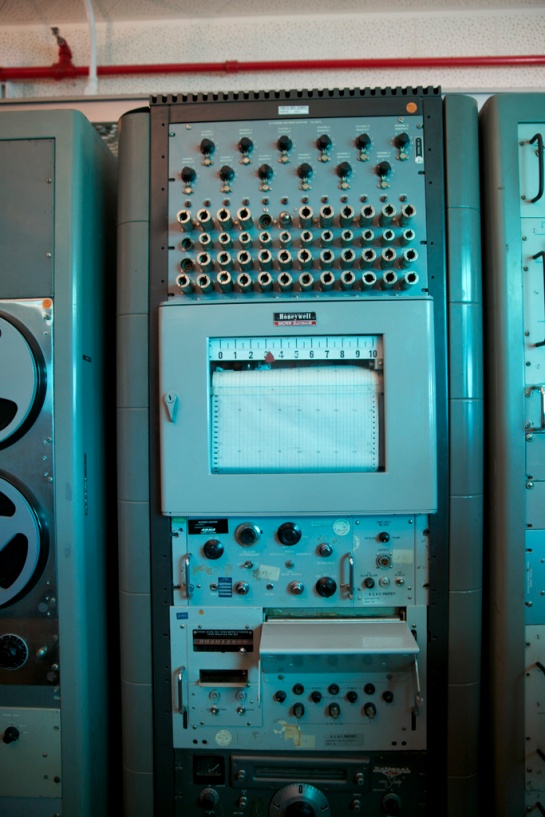 Another stereoscopic view of the Lunar Module on show at Cape Canaveral. The stereoscopy helps lift it our of the noisy distracting background. I will post a bunch more things from Cape Canaveral this week – after the first trip we took a second round some of the older launch sites.

A few more details of the Frank Lloyd Wright blocks at the Southern Florida College, Lakeland. The William H.Danforth Chapel has simpler blocks than in the adjacent Annie Pfeiffer Chapel shown in previous posts. There is the same stack bond and cavity wall but the surface elaborations are simpler. The Annie Pfeiffer Chapel blocks carry a figure that runs across pairs of blocks horizontally. In the William H.Danforth Chapel the horizontal joint is not where you might immediately expect, but sits just above the horizontal indent to form a subtle second subdivision, so the figure of the blocks is connected vertically. You can see this most clearly on the corner detail. It was completed in 1955. 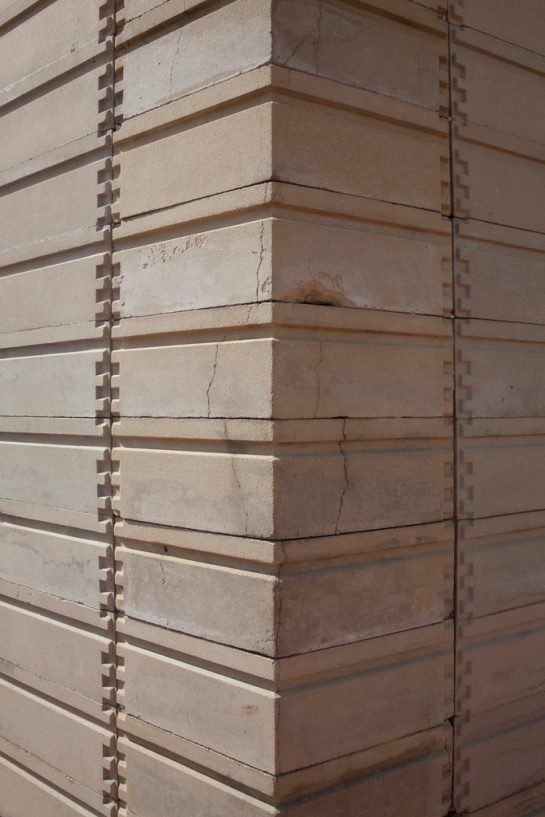 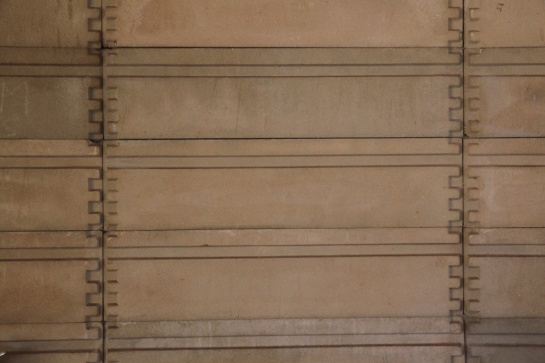 Above: the Annie Pfeiffer Chapel is to the left with the William H.Danforth Chapel behind it

Annie Pfeiffer Chapel from the outside

If you look at the lower art of the junction between the two block walls (in the centre of each image) you can see the damaged section that reveals the cavity wall construction shown in the view below.

All the images are of the Annie Pfeiffer Chapel by Frank Lloyd Wright at Florida Southern College in Lakeland. Usual procedure for resolving the 3D pairs of images.

An exterior view of the lunar module. A few people have commented that some of my drawing instruments resemble this craft, and the legs of Instruments Four, Five, Six, Seven and Eight have similar leg geometry although the sections and character of the legs are very different – and they are tripods rather than quadrupeds (the Lunar Module is the latter). They also share a two part organisation with a lower supporting element holding the more active programs. There was certainly never any intention to mimic the lunar module in the drawing instruments but it is something I like very much –  a simple interior with program shrink wrapped around it.

This is from the Saturn Five Hall at Cape Canaveral, and the architecture of the hall provides a noisy background for this wonderful object so I have posted a close up of the core of the Lunar Module. I also took some wider views where it separated from the background when viewed stereoscopically. I might post some more general views later.

As usual, to view the images in 3D go cross-eyed until a common feature in the two images registers over the other image. Try to relax for the three dimensional depth to improve. If you are finding it hard to register, shift your head slightly to get the horizon to align.

An interior view of the Lunar Module – thanks again for the drawings, Anne! 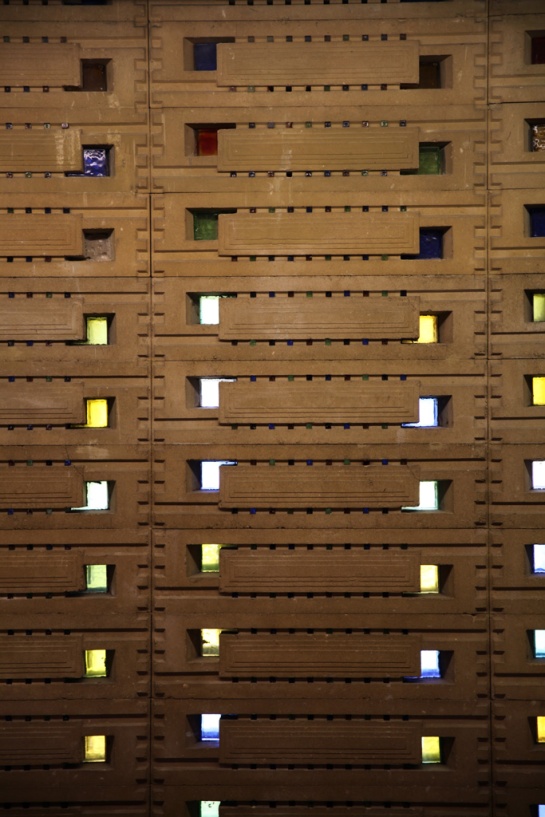 The blocks in Frank Lloyd Wright’s Annie Pfeiffer Chapel at the Florida Southern College are some of his most elaborate, made possible partly through cheap student labour. The blocks have stained glass inserted into them, a combination of a larger L-shaped piece at either end of each block and smaller square pieces along the top and bottom. The inside and outside skin are made of identical blocs, with a cavity in between. The blocks are a composite wall and window. Here are a bunch of interior and exterior details. 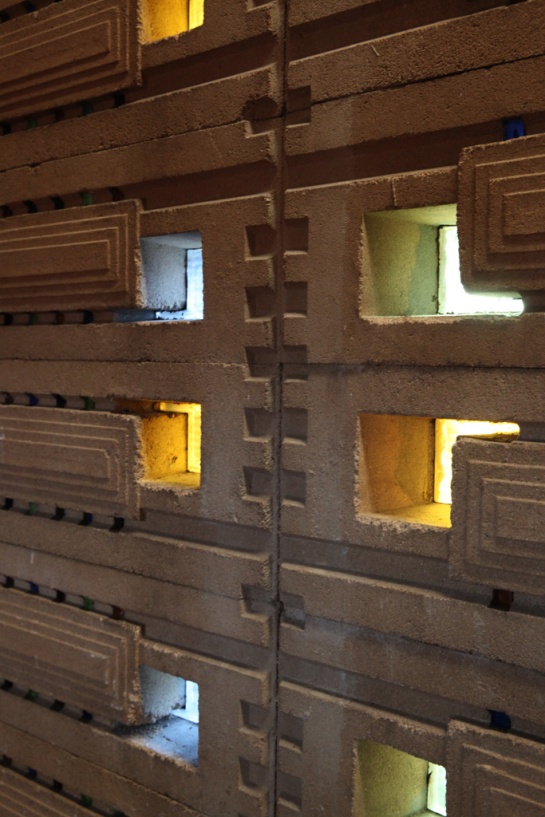 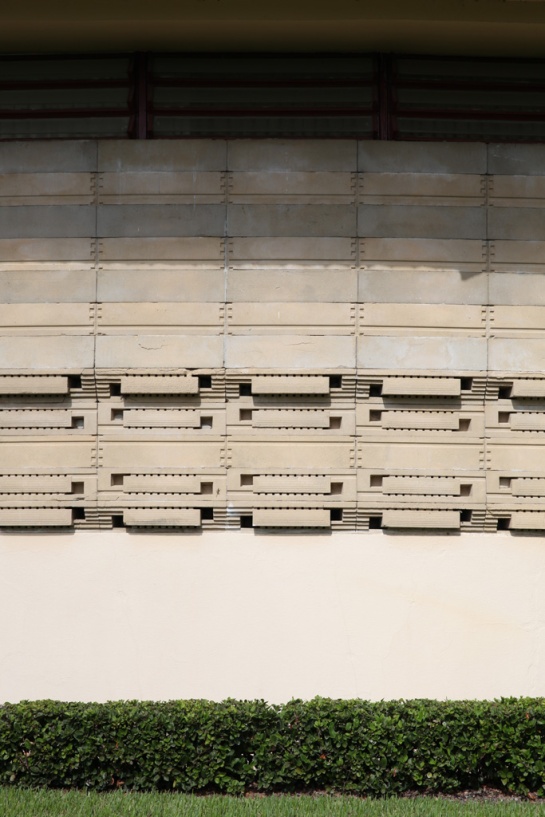 We visited Florida Southern College to study Frank Lloyd Wright’s concrete block designs for the seven buildings he built there. THis is the Thad Buckner Building, formerly the E.T. Roux Library completed in 1945.

The blocks are a development of his textile block work in Los Angeles from the ’20s and have similar joint details (I will post some pictures of some of these where the walls have failed). The character of the work emerges though his invention of these building elements. There are abundant technical problems with the blocks (the accelerated decay gives some of his buildings a picturesque quality) but I find them really helpful in thinking through how to make building components that are appropriate to the content of the architecture. 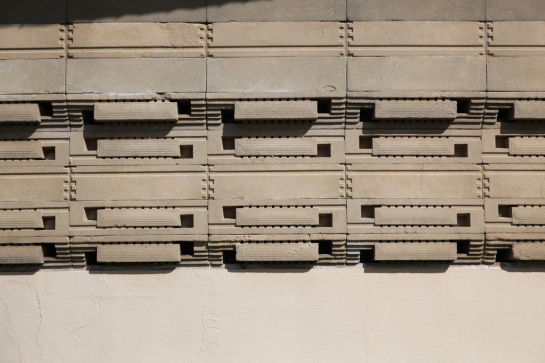 Some more views of the crawler. The view above is from the interior of the Vehicle Assembly Building  as the crawler is driving by. The images below are of the same crawler driving towards the launch sites, with attendant water spray trucks. 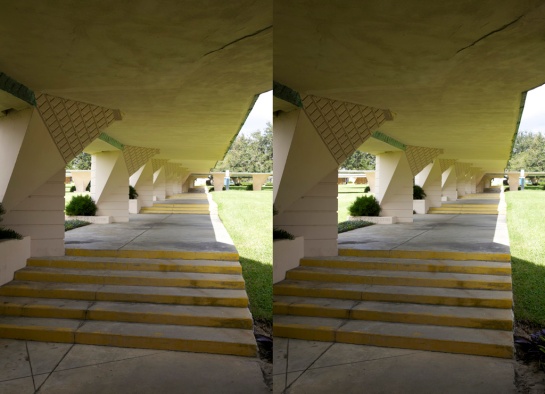 We visited Florida Southern College in Lakeland, Florida, today. The main reason was to look at the ambitious concrete blocks (which I will post about soon) that Frank Lloyd Wright developed for the project. He built seven buildings on the campus and made proposals for others. These are some of his walkways to protect from the Florida sun. 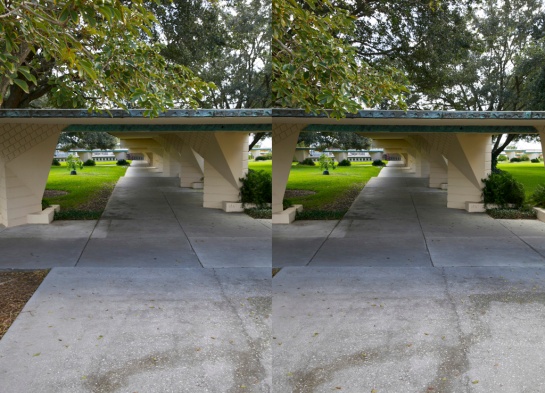