Instrument Six is not on the same trajectory as the other instruments, but arrived as a consequence of a conversation about instrument five. I was explaining the drawing pieces to a friend as elements of space that were active.

As an analogy I said that they were a little like the interior of a submarine that was made up entirely of programme and not of passive elements. My friend e-mailed back to say that he had not been in a submarine so I assembled and sent off a pair of stereoscopic photographs I had taken a couple of years earlier showing such a space. After I had sent them I took a closer look at the stereo pair and noticed what was at first an annoying blur hovering in space. Quickly I realised that the annoying blur was on fact the very thing I had been chasing, a paradoxical shadow. It was so obvious how it had occurred that I was annoyed at not thinking of it before. At the time I was working on Instrument Five and stopped work on those instruments to build Instrument Six to play with the possibility of a shadow detached from the surface on which it should by rights be cast. The picture I sent is below but the lower image from another view works at least as well. Tomorrow I will post some more pictures of the instrument and its floating shadows in 3D. 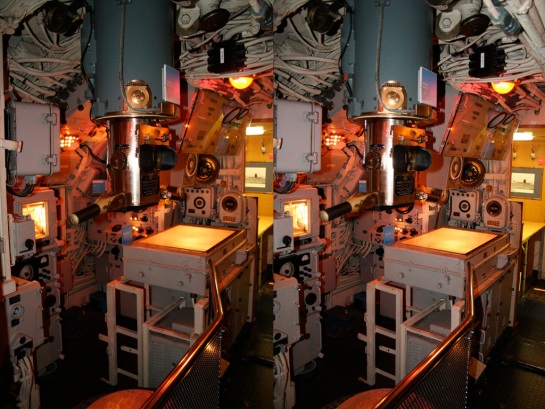 The floating shadow is just to the right of the periscope. If you are new to this blog, yo can view the image in 3D by going cross-eyed. When doing so, place one image over the other until they register. You will see three images, with the 3D image in the middle.  If you are having difficulty pinning it down, try adjusting your horizon slightly to make sure the images are level with each other. The three dimensionality improves if you hold it for a short while.

It is worth persevering with resolving the 3D image – apart from the floating shadows, submarine interiors really come alive in 3D.