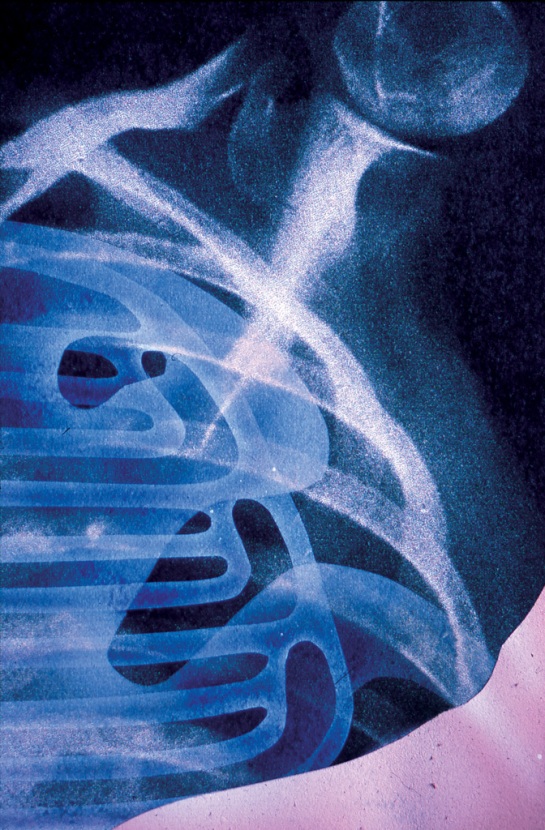 The stereoscopic anatomical drawings describe the apparatus to make an internal architecture. THis sequence of paired drawings discusses the revelation of the architecture in both a practical way but also by implication a sense of the larger spatial consequence of the project. Each pair of drawings has an X-ray and a photographic illustration of the position the body has to hold to take that X-ray. The base images (except for the final X-ray) are taken from Positioning in Radiography by K.C. Clark (1949 edition). Francis Bacon worked from images in the 1939 edition of the same book.

Each X-Ray shows parts of the new body apparatus but they are available to this sort of inspection selectively, so not everything is visible. The positioning photographs display a formal transparency of the apparatus, again selectively as only those parts that press against the skin are visible.

When walking in the city (with clothes, mainly for modesty and or vanity, for the apparatus copes with all but the chilliest or steamiest climes) the person hosting the architecture is formally indistinguishable form anyone else except through their behaviour – perhaps being alive and engaged in the world and maybe through the ability to wear out of season clothes – the apparatus coping with the temperature difference.

In the positioning picture (2B) you can see a filter under her skin just above her forearm and the top of the breathing/cooling components just below her collar bone, the piece that is visible in the X-ray.

I found the radiography manual in a second hand bookshop just outside Manchester for three pounds when I was visiting friends. It had been a student f the year prize for a radiographer and includes things like X-rays of unborn babies (very beautiful but where one might wonder about the effects of the X-ray on the baby) and one of a man who has swallowed his false teeth. 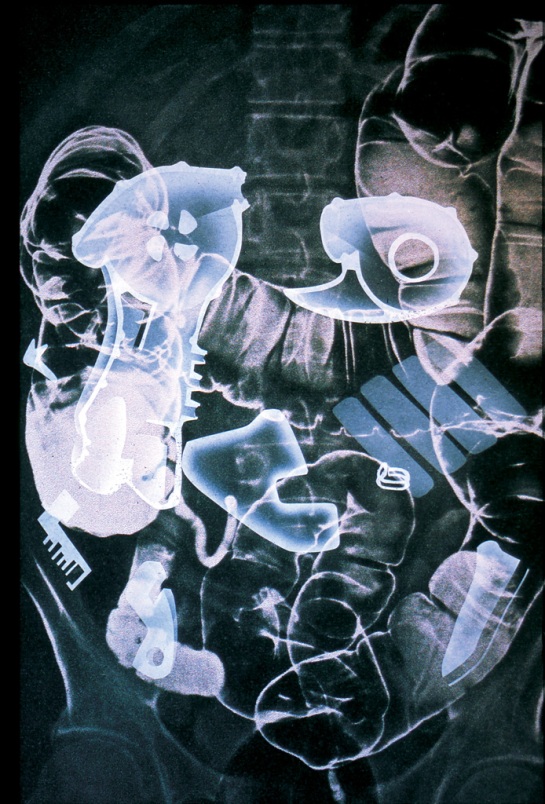 X-Ray 3A is not from Positioning in Radiography, but 3B is, the positioning to take the image in 3A. The X-Ray shows the selective revelation of the intestines through the agency of a barium meal – tissue that would otherwise be transparent to X-Ray shows up due to the meal. The image is unlikely, as the synthetic organs of the new apparatus should divert toxins through the synthetic system (and therefore reveal them more fully) so we have to assume that the apparatus has been turned off to check the natural organs. In the positioning photograph you can again see discrete bumps around her waist and abdomen where the apparatus pushes into the skin.